
Thank you for subscribing to the Civil Newsletter!
Oops! Something went wrong while submitting the form.
New Articles every Monday, Wednesday, and Friday
May 6, 2022
·
Sports

A Basketball Star Stuck in Russia 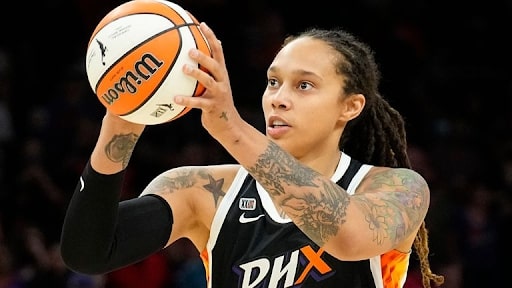 Griner Arrested. In February, Russian authorities arrested Brittney Griner, an Olympic gold medalist and WNBA star, accusing her of illegally possessing vape cartridges containing cannabis oil. Griner had just traveled from New York to Moscow to play in a basketball tournament before officers arrested her at the airport. WNBA stars commonly play outside the U.S. during the offseason since salaries are significantly higher in other countries. Shortly following the Russian invasion of neighboring Ukraine, reports of Griner’s arrest became public, further escalating tensions between the U.S. and Russia. In March, a Russian court extended her detention to May 19. Russia has strict drug laws, and Griner could face up to a 10-year sentence.

Wrongful Detention. Sports analysts widely consider Griner to be one of the best female basketball players ever, prompting questions about the relative quiet regarding her arrest in Russia. Some say it could be an intentional tactic not to aggravate already hostile relations between the U.S. and Russia. Others argue it highlights significant gender inequities between male and female athletes.

On Tuesday, the State Department announced it was reclassifying her case to “wrongfully detained,” a significant shift that means the U.S. will push more aggressively for her release. It is unclear what led to the change, although there has been mounting pressure from the WNBA and members of Congress to work more actively to bring her home. Griner is among several American citizens currently detained in Russia, though her case is perhaps the most high-profile. The Biden administration says securing her release is a top priority. However, the situation is incredibly complicated, especially given the current state of Russian-American relations. Russia recently released former U.S. Marine Trevor Reed in a prisoner swap between the two global powers, offering some hope for Griner.