
Thank you for subscribing to the Civil Newsletter!
Oops! Something went wrong while submitting the form.
New Articles every Monday, Wednesday, and Friday
February 1, 2022
·
Supreme Court

Justice Stephen Breyer, the oldest justice serving on the Supreme Court, announced he would retire at the end of the current term. 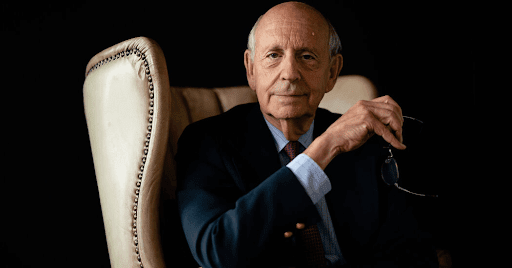 During the first year of his presidency, Joe Biden nominated a historically diverse group of judicial candidates, a track record he hopes to continue with the Supreme Court. Last Thursday, Supreme Court Justice Stephen Breyer announced his retirement, which will take effect at the end of the current term (June or July 2022). President Bill Clinton appointed Breyer to the Supreme Court in 1994, where he has served for 28 years and is the Court’s oldest current justice. He garnered a reputation as a pragmatic justice for considering the practical impacts of his rulings, like his decision in National Labor Relations Board v. Noel Canning (2014). President Biden vowed to nominate a Black woman to replace him on the nation’s highest court, a historic first. While Breyer’s retirement will allow Biden his first opportunity to fill a Supreme Court vacancy, it is unlikely to meaningfully alter the Court’s 6-3 conservative majority.

The Constitution requires presidents’ judicial nominees to receive Senate confirmation. In the past, these nominations were subject to the filibuster, which required 60 senators to support a candidate. However, Senate Democrats approved a rule change known as the “nuclear option” in 2013, eliminating the filibuster for all presidential nominees except those to the Supreme Court. In 2017, Senate Republicans extended the exemption to Supreme Court nominees to allow confirmation via a simple majority vote.

Many political analysts expect Republicans to retake control of the Senate in the midterm elections, and current Senate Minority Leader Mitch McConnell (R-KY) has pledged to block any of the President’s Supreme Court nominees should that occur. Many Democrats feel this underscores the urgency for Biden to appoint a replacement while they control the chamber. While division among Senate Democrats appears to have doomed key Biden administration priorities, they have been in lock-step in considering federal judicial appointments. The White House hopes this unity will continue for the President’s Supreme Court nominee, and even believe they could draw support from a few Senate Republicans.

Legal pundits widely view Ketanji Brown Jackson as the front-runner for the opening Supreme Court seat. Jackson is a Harvard Law School graduate and formerly clerked for the retiring Justice Breyer. Early in her career, she served as a federal public defender. She began serving as a U.S. District Judge in 2013 after President Obama nominated her for the position and the Senate confirmed her. Last year, Biden appointed Jackson to the D.C. Court of Appeals, one of the nation’s most influential appellate courts. She has ruled on prominent legal issues in both roles, from Covid-19 policies to congressional subpoenas.

Another potential replacement for Justice Breyer is Leondra Kruger. Kruger graduated from Yale Law School and clerked for former Justice John Paul Stevens. She worked in the U.S. Justice Department during the Obama administration and argued a dozen cases in front of the Supreme Court. Kruger has served as a justice on the California Supreme Court since former Governor Jerry Brown (D-CA) appointed her in 2014; at 38, she was one of the youngest people ever nominated to that position. Many legal observers view her as relatively moderate on her current court.

J. Michelle Childs is another possible Biden nominee and has a powerful advocate in House Majority Whip Jim Clyburn (D-SC), a close congressional ally of the President. Childs is currently a federal district judge in South Carolina, a role she has held since her 2010 appointment during the Obama administration. Clyburn has pushed the President to consider Childs for a higher federal court, citing her blue-collar background and non-Ivy League education, two rarities on the Supreme Court. Notably, fellow South Carolinian Republican Senator Lindsey Graham appeared to endorse her, calling her “qualified by every measure,” although he stopped short of promising to vote for her.

Though many observers believe those three women are the presumptive top choices, some have floated other names, including Sherrilyn Ifill, Melissa Murray, Holly Thomas, Eunice Lee, Candace Jackson-Akiwumi, and Wilhelmina Wright. While the White House has not made an official shortlist public, the President has promised to put forth his nominee by the end of February.

America’s highest court should reflect the diversity of the citizens its rulings affect. In its nearly two and a half centuries of existence, the Supreme Court has only had five female and two Black justices, and it has never had a Black female member. President Biden is honoring his campaign promise to nominate one to the Supreme Court should a vacancy emerge. Despite the arguments from the Right, this pledge is not without precedent. President Reagan pledged to nominate a woman to any Supreme Court vacancy during the 1980 election and President Trump announced he would appoint a woman to fill Justice Ruth Bader Ginsburg’s seat following her passing in 2020. All the potential candidates would be exemplary justices and bring a unique perspective the current Supreme Court lacks.

The Democrats’ and Biden’s support of racial hiring is immoral and contrary to the teachings of Dr. King. Presidents should select Supreme Court justices on merit, not skin color. Radical portions of the Democrat Party have sought to legalize such racial hiring practices. For example, California’s 2020 Proposition 16 ballot initiative proposed removing a civil rights law preventing consideration of race when hiring. The truth is that Biden is not looking for a qualified black woman; he is looking for a political activist that will vote his way on decisions. For instance, Joe Biden filibustered Janice Rogers Brown’s appointment to a federal bench, stalling her nomination to the D.C. Circuit Court for two years! Also, many believe top Democrats forced Justice Breyer into retirement because they fear they will be unable to replace the aging Justice when they lose control of Congress in November.

Summary of remarks between President Biden and Justice Breyer.

Harry and Calum of the Lotus Eaters Podcast discuss the retirement of Justice Breyer and the potential actions President Biden will take to fill the seat.

The Pod Save America hosts discuss Justice Breyer’s retirement and give a look at the potential nominees and how the confirmation process for Breyer’s replacement could play out.