
Thank you for subscribing to the Civil Newsletter!
Oops! Something went wrong while submitting the form.
New Articles every Monday, Wednesday, and Friday
April 25, 2022
·
Entertainment

Republicans revoked Disney’s special status that allowed the Walt Disney World to self-govern after it opposed a recent education law. 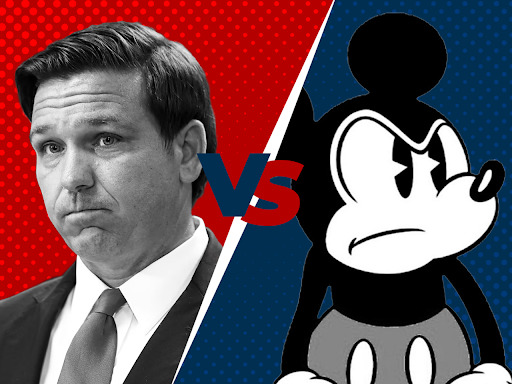 To read our previous coverage on the Parental Rights in Education Bill, otherwise known on the Left as the Don’t Say Gay Bill, click here.

The Battle Begins. After Florida Governor Ron DeSantis (R) signed the Parental Rights in Education bill into law in March — dubbed the “Don’t Say Gay” bill by critics — the Walt Disney Company came out against the legislation. Disney released a statement saying the bill “should never have passed and should never have been signed into law” and said its goal “is for this law to be repealed by the legislature or struck down in the courts.” DeSantis slammed the entertainment giant in response, and many of his fellow conservatives turned their ire toward Disney, questioning its motives.

Quiet as a Mouse. Many on the Left previously slammed the company for refusing to come out publicly against the bill and were further angered by reports that it had given over $250,000 to Republican supporters of the legislation. These criticisms prompted Disney CEO Bob Chapek to apologize for the company’s silence on the bill and announce a pause on political donations in Florida.

After Disney took a stance on the Florida legislation, Manhattan Institute senior fellow Christopher Rufo posted a leaked video clip of a Disney meeting about the bill. The video showed company executives promoting gender-neutral language at theme parks and a “gay agenda” in its entertainment content.

The Most Magical Place on Earth. In 1967, Disney and the Florida Legislature negotiated the special district so the company could develop the Walt Disney World Resort’s infrastructure and operate municipal services at no cost to taxpayers. It effectively gives the Resort self-governing authority, exempting it from many state regulations.

Republican Retribution. Following the public statements from Disney, DeSantis urged the Legislature to repeal Florida’s special exemption status for Walt Disney World. Many Republicans note that fellow Florida theme parks, such as Universal, SeaWorld, and Legoland, do not have special districts. On Friday, the Governor signed legislation stripping Disney of this status.

Tax Dispute. Once the law takes effect in June 2023, Orange and Osceola counties, which surround the Resort, will take on responsibility for the district’s municipal services (like water and roads) and liabilities — primarily its debt. According to lawmakers, the district currently has at least $1 billion in debt, prompting many to criticize the move. They argue that this debt will drive up taxes in the surrounding counties. However, the law’s proponents claim the move will benefit taxpayers, saying the tax revenue Disney pays will transfer to the counties.

Impact on Disney. In a press release about the bill signing, the Governor argued that Disney will face tax increases, not Florida residents. DeSantis told donors in a fundraising email, “If Disney wants to pick a fight, they chose the wrong guy.” Dissolving the district means the company can no longer use public debt to finance improvements to the Resort. It is unclear what that would mean for Disney’s operating costs.

Will Mickey Fight Back? Disney has long been a powerful player in Florida politics as the state’s largest private employer. How it decides to respond to the bill remains unclear, but the polarized debate surrounding the company and LGBTQ issues is likely to rage on.

Biden Weighs In. Last Thursday, President Biden said that the Governor’s moves are out of line with traditional conservative values and signal that the far-right has taken over the Republican Party, a criticism Democrats will likely continue.

DeSantis 2024? Many political pundits view DeSantis as a likely Republican contender for president in 2024. He has frequently been in the national spotlight, championing conservative policies on issues like immigration and abortion. DeSantis and fellow Republicans are also looking to continue along the lines of legislating on transgenderism by announcing new Health Department guidance. The guidance states that due to the lack of conclusive evidence, and the potential for long-term, irreversible effects, the Department’s guidelines are as follows:

With this latest move, DeSantis is solidifying his image, claiming he is willing to stand up to a “woke” company that doesn’t share Florida’s values.

DeSantis and his henchman are punishing Disney for taking a stand against the unconstitutional Don’t Say Gay bill. This move violates companies’ right to speak out against such bigoted laws. DeSantis’ temper tantrum will be incredibly costly to Florida taxpayers. His attempts to boost his conservative image at the expense of basic human rights will backfire.

Republicans are taking a strong stance to fight against the grooming and mutilation of children. Florida should continue with its guidance to prevent kids and teens from irreversibly having their genitals altered. If Disney wants to continue to support grooming children into their self-proclaimed “gay agenda,” there is no reason for the state of Florida to continue supporting Disney.

The Sun Sentinel’s Editorial Board slams Governor DeSantis and Florida Republican lawmakers, arguing that they engaged in a reckless campaign to punish Disney out of spite, without regard to the consequences.

C-SPAN covers the historical context and implications of the dispute between Florida Governor Ron DeSantis and the Walt Disney Company. It also provides related articles and additional resources.