
Thank you for subscribing to the Civil Newsletter!
Oops! Something went wrong while submitting the form.
New Articles every Monday, Wednesday, and Friday
March 7, 2022
·
LGBTQ 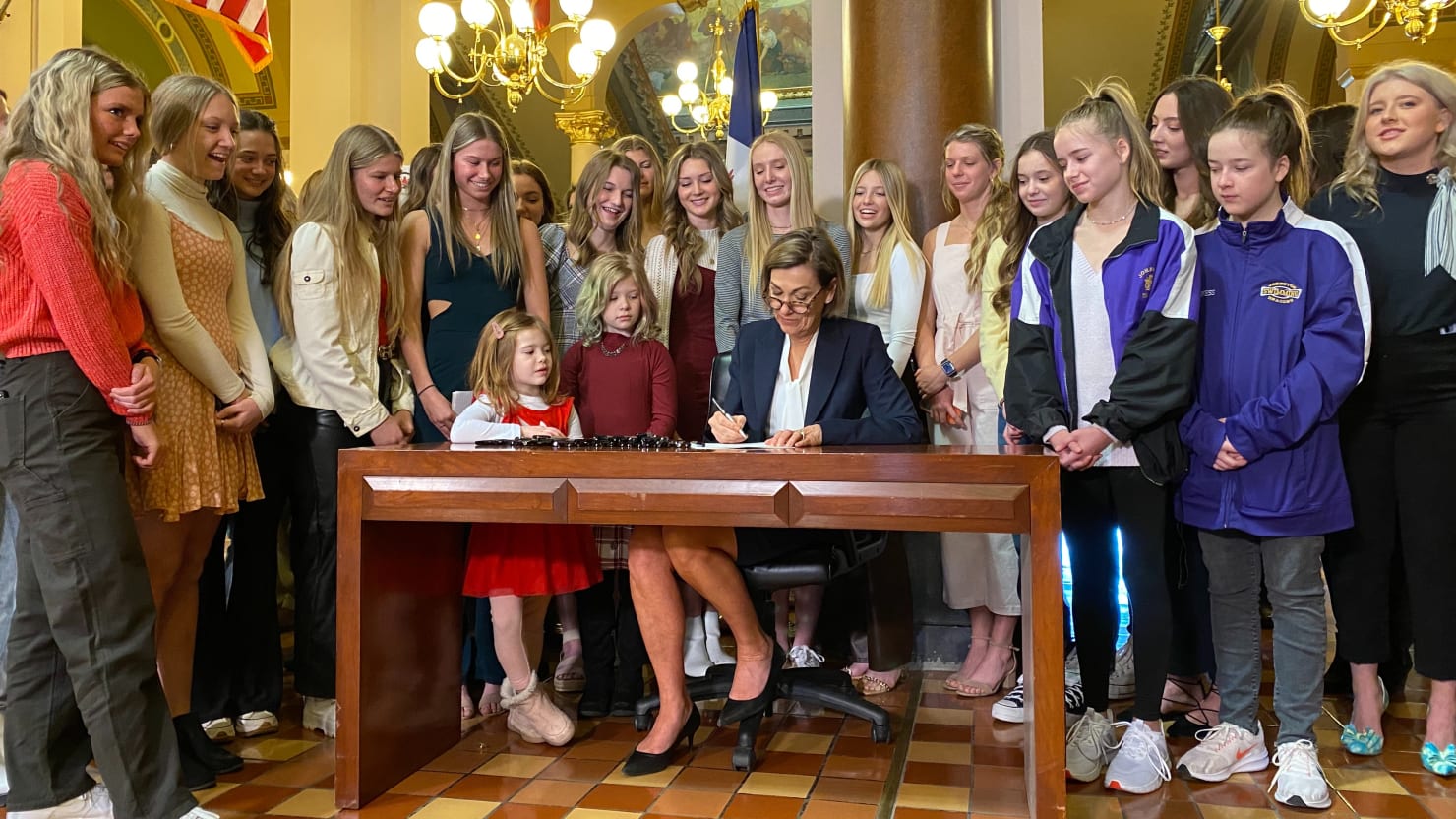 Last Thursday, Iowa Governor Kim Reynolds (R) signed a bill banning transgender girls and women from competing in girls’ and women’s sports. This new law applies to K-12 schools, colleges, and universities. Reynolds, who just delivered the Republican rebuttal to President Biden’s State of the Union address last Tuesday, first called for the legislature to pass such a bill in May 2021. She signed the ban in the Iowa Capitol rotunda, surrounded by a group of student-athletes. The bill, which passed with only Republican support, requires schools to designate sporting events as female, male, and co-ed, and only athletes with female listed on their birth certificate can participate in the female events. The law does not include a similar provision regarding mens’ sports. It also allows students to sue their schools if they violate the law. The ban takes effect immediately.

The bill generated intense controversy in Iowa, drawing national praise and criticisms. Republicans argue that the law is about fairness, saying that transgender girls have a physical advantage in sports, robbing student-athletes of access to honors and scholarships. Reynolds called it a “victory for girls’ sports in Iowa,” declaring that “Forcing females to compete against males is the opposite of inclusivity, and it’s absolutely unfair.” Democrats claim the ban is discriminatory, violating federal civil rights laws, and that it harms transgender girls that are already facing enormous marginalization. Iowa Senate Minority Leader Zach Wahls (D) called the Governor’s decision to sign the bill “appalling.” Jen Klein, who co-chairs the Gender Policy Council for the Biden administration, labeled it “discrimination.”

Many legal observers believe the ban will spark lawsuits. LGBT advocacy groups have already sued states over similar laws, and the U.S. Justice Department challenged such measures in West Virginia and Arkansas as unconstitutional. Primarily, these suits have centered around Title IX, a 1972 federal civil rights law that prohibits schools and educational institutions that receive federal funding from discriminating based on sex. A recent Supreme Court case (Bostock v. Clayton County) and updated guidance from the U.S. Department of Education have interpreted “sex” to include gender identity. If the Department’s Office of Civil Rights views the Iowa law as a violation of Title IX, it could take punitive actions, including jeopardizing federal funding. Before its passage, a report from the nonpartisan Legislative Services Agency warned that the bill could constitute a violation. However, Republicans insist that the legislation upholds Title IX’s intent, not violates it.

Reynolds’ approval makes Iowa the 11th state to enact such a law — all of which have Republican governors; Indiana’s state Senate approved a transgender girls’ sports ban just last week. However, some Republican governors have resisted such efforts. Last April, North Dakota Governor Doug Burgum vetoed a similar bill from the Republican-led state legislature. Last Friday, Utah’s state House and Senate passed a ban prohibiting transgender students from participating in girls’ sports, prompting Governor Spencer Cox (R) to announce he will veto the bill. Still, the issue has emerged as a top campaign point for some of the Republican Party’s standard-bearers, including former President Trump, who has pledged a nationwide version of these bans if he becomes president again.

Iowa’s new ban is another egregious example of Republicans’ discriminatory attack on LGBTQ youth. Transgender student-athletes pose no threat to their fellow competitors. Republicans have manufactured this “problem” as yet another culture war rallying point for the midterm elections this fall. They value political expediency over the mental health and lives of transgender kids across the country, who already face astronomical rates of abuse and marginalization. These laws are tantamount to state-endorsed bullying. In addition to being unbelievably harmful, the ban violates existing federal civil rights protections for the LGBTQ community, including the long-established anti-discrimination statute Title IX. These laws are dangerous and unconstitutional, and appropriate legal bodies should throw them out as such at every available opportunity.

One of the original purposes of Title IX was to ensure women had equal access to sports as men. Allowing biological men with a physical advantage to compete against women violates Title IX protections. Young women have been cheated out of championships by allowing biological men to compete. In addition, there is a risk of extreme physical harm from contact sports. Trans MMA fighter Fallon Fox has continuously fractured the skulls of her female opponents and presents a life-threatening risk in female competitions. For the health, safety, and success of women, trans athletes should compete in a different league.

Should “Transgender Women” Be Allowed to Compete in Women’s Sports?

Like many high school athletes, Chelsea Mitchell invested years of hard work and dedication in training to be a track star. But no amount of training could prepare her for a decision made in her home state of Connecticut — she would now have to compete against biological males.

MMA fighter Fallon Fox twice broke an opponent’s skull to win matches and now some in the LGBTQ community are praising the athlete.

Why are U.S. states banning transgender women from sport?

The Human Rights Campaign, the largest LGBTQ advocacy and lobbying group in the United States, issued this press release about the new Iowa law, criticizing it as hateful and discriminatory.

Scientific American argues that Republicans use transgender girl sports bans to whip up their base about an issue that is not all that prevalent, all at the expense of transgender youth in their states. They debunk common arguments for these policies, both historically and scientifically.

How Sports Have Been Used to Attack Trans People