
Thank you for subscribing to the Civil Newsletter!
Oops! Something went wrong while submitting the form.
New Articles every Monday, Wednesday, and Friday
April 8, 2022
·
Supreme Court

On April 7, the Senate voted 53-47 to confirm Ketanji Brown Jackson as the next Associate Justice of the Supreme Court. 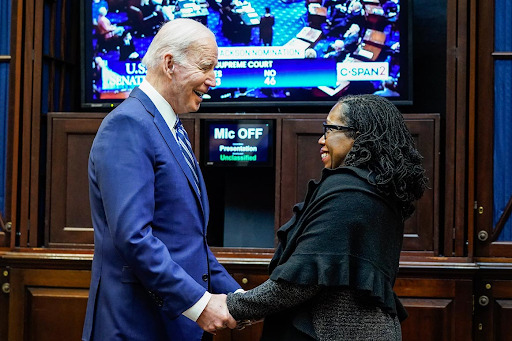 Yesterday, the Senate confirmed Ketanji Brown Jackson to the Supreme Court. In late February, President Biden nominated Jackson to replace current Justice Stephen Breyer, who announced he would retire this summer. (Read Civil’s coverage of the nomination here.) She will be the first Black woman to serve on the Supreme Court. Jackson will join three other women on the bench — the first time that four women have sat on it together. At 51, Jackson is young enough to serve for decades in the lifetime appointment.

Throughout Jackson’s confirmation hearings, Republicans on the Senate Judiciary Committee characterized her as overly liberal in her judicial philosophy and soft on crime — arguing that she handed down light sentences in child pornography cases. Democrats rebuffed those allegations, saying she is a mainstream judge and accusing Republicans of misrepresenting her record. (Read Civil’s coverage of the confirmation hearings here.) While the panel typically makes recommendations to the entire Senate on nominations, it deadlocked along party lines in an 11-11 vote on Monday. Following the tie, the Senate voted 53-47 to approve a procedural motion to bring her nomination to the floor.

Despite Senate Minority Leader Mitch McConnell’s (R-KY) efforts to keep his caucus from supporting her, three Republicans joined all 50 Democrats to vote for Jackson. These three Republican Senators — Susan Collins (R-ME), Lisa Murkowski (R-AK), and Mitt Romney (R-UT) — argued that she was well qualified for the job and criticized the confirmation process as too partisan. Romney voted against her nomination to the D.C. Circuit Court of Appeals last year when the Senate also confirmed her with 53 votes. Senator Lindsey Graham (R-SC), who joined Collins and Murkowski to support her at that time, voted against her yesterday.

Thursday’s vote represents a win for Democrats, who have not confirmed a nominee to the nation’s highest Court since 2010 and had to endure three confirmations under former President Trump, securing a 6-3 conservative majority. However, the political ramifications are unclear ahead of the upcoming midterm elections and have varied in the past. Murkowski is the only one of Jackson’s three Republican supporters up for election this cycle, and she faces a Trump-backed challenger from her right. While she has survived such efforts in the past, the former President and Alaska’s Republican Party have endorsed her opponent, and Murkowski may face a tight race. Murkowski’s vote for Jackson could add further fuel to her challenger.

The confirmation’s impact more broadly is even more unclear. The Supreme Court has become a flashpoint for some of the most hotly contested issues in American politics, from abortion to guns to voting laws. In recent years, it has become a significant motivator for voters of both parties. According to a Washington Post poll, over a quarter of 2016 Trump voters said that the Supreme Court was the basis of their decision. In 2018, almost every red state Democrat that voted against Kavanaugh lost their reelection bids, and most political pundits believe the vote was at least partially responsible for their loss. The Supreme Court surged to one of Democratic voters’ top issues in 2020 following the death of Justice Ruth Bader Ginsburg. It is unclear whether Jackson’s confirmation will substantially impact the 2022 elections, but these recent trends suggest it is likely.

The Senate’s confirmation of soon-to-be Justice Jackson is a historic step toward ensuring the Supreme Court reflects America’s diversity. Many Republican senators, while promising a respectful hearing, engaged in baseless smear campaigns to boost their political profiles. Jackson weathered those disgusting partisan attacks with dignity, and 53 U.S. senators recognized her outstanding intellect and qualifications. This vote sends an inspiring message to young Black girls across America who will now see themselves represented on the Supreme Court. Jackson will be an incredible Justice, and we should celebrate her confirmation.

Ketanji Brown Jackson has proved herself to be a light-on-sentencing activist judge. In addition, the Senate just appointed a Justice who cannot define the word “women.” Regardless of any strengths she may have had, what is truly tragic is that she was selected solely for her race. Joe Biden immediately stated he would replace Justice Breyers with a “black woman” rather than “a highly qualified individual regardless of their skin color.” It is a sad state of the nation that we have a President who openly supports racial hiring practices.

The NAACP’s President and General Counsel both praise Jackson and her confirmation, highlighting the difficult path to this point.

The Guardian that Republicans’ attacks on Jackson show the GOP has shifted to the far-right, appealing to the extreme members of their base through conspiracy theories.

LOL: "What Is A Woman?" Blackburn DESTROYS Ketanji Jackson With One Question

Biden’s Supreme Court nominee Ketanji Jackson is unable to answer simple questions, like what a woman is.

Watch Vice President Kamala Harris preside over the Senate’s confirmation of Ketanji Brown Jackson as the next Associate Justice of the Supreme Court.