
Thank you for subscribing to the Civil Newsletter!
Oops! Something went wrong while submitting the form.
New Articles every Monday, Wednesday, and Friday
February 28, 2022
·
Supreme Court 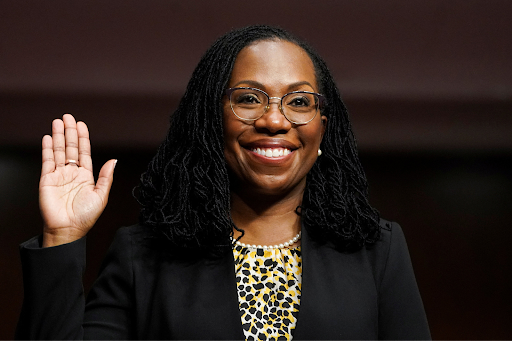 During his presidential campaign, Joe Biden promised to dramatically reshape the federal judiciary by appointing historically underrepresented groups to the courts. Last Friday, President Biden announced his nominee to replace the retiring Justice Stephen Breyer on the Supreme Court: Ketanji Brown Jackson. If confirmed, Jackson will be the first Black woman and first former public defender to serve on the Court. At 51 years old, she would also be one of the youngest justices on the Supreme Court, second only to Justice Amy Coney Barrett, who is 50. However, Jackson’s appointment would not shift the Court’s ideological balance, as she would replace another liberal Justice, leaving the six-justice conservative majority unaffected.

Jackson attended Harvard University and then Harvard Law School, graduating in 1996. After graduation, she clerked for three federal judges (including once for Breyer himself), worked at four law firms, and served on the U.S. Sentencing Commission. In 2005, Jackson became an assistant federal public defender, which she testified had a significant impact on her tenure as a trial judge. In 2012, President Obama appointed Jackson to serve as a district judge, and the Senate confirmed her to the position in a voice vote in March 2013. In that position, she ruled on pressing legal issues, perhaps most notably in Committee on the Judiciary v. Donald McGahn. Her decision found that then-President Trump’s former White House counsel had to comply with a House Judiciary Committee subpoena, despite Trump ordering him not to. Rulings like McGahn have led Republicans to voice concern, claiming she is an activist judge.

Last year, President Biden tapped her to fill a vacancy on the U.S. Court of Appeals for the D.C. Circuit, which some call the nation’s “second-highest court,” as it deals with many high-profile cases and its judges often become Supreme Court justices. Chief Justice Roberts, Justices Thomas and Kavanaugh, and the late Justices Scalia and Ginsburg served on the D.C. Circuit before joining the Supreme Court. The Senate confirmed Jackson in June 2021 in a 53-44 vote. In her short time on the court, she ruled on another significant legal issue. She joined a majority decision blocking President Trump’s executive privilege claims over documents the House panel investigating the January 6 breach of the Capitol requested from the National Archives, a decision the Supreme Court upheld in January 2022.

President Biden’s nomination of Jackson is her first step in a complicated process to join the Supreme Court. All federal judges serve a lifetime appointment and require Senate confirmation. Here’s what that process looks like…

Since 1975, it has taken an average of about 68 days from nomination to final vote, although the range stretches from 19-108. The Democratic Senate leadership has promised a swift but deliberate process, setting a tentative goal of confirming Jackson by April 8.

A few decades ago, justices often received unanimous or near-unanimous confirmation votes, such as Breyer, who the Senate confirmed 87-9. However, the process has become much more partisan over time, and Jackson’s confirmation could become a bitter fight. While the Senate has confirmed Jackson with bipartisan support for previous judicial positions, that does not necessarily mean she will secure it for this appointment. Already Senator Lindsey Graham (R-SC), one of the three Republicans who supported Jackson for the D.C. Circuit, has indicated a tougher stance, saying the nomination means “the radical Left has won President Biden over again.”

However, Graham is not the only potential Republican vote for Jackson. The White House has quietly courted Senators Susan Collins (R-ME) and Lisa Murkowski (R-AK), who both supported her for the D.C. Circuit position, and Senator Mitt Romney (R-UT). Also, while centrist Democratic Senators Joe Manchin (D-WV) and Kyrsten Sinema (D-AZ) have effectively killed key pillars of Biden’s legislative agenda, they are much less likely to oppose the President’s Supreme Court pick. The potential absence of Senator Ben Ray Lujan (D-NM), who suffered a stroke in late January, may complicate matters. While he assured his constituents that he would return to vote on Biden’s nominee, Democrats cannot push any party-line vote in the 50-50 Senate without him.

In a remarkable display of progress, President Biden’s nomination of Ketanji Brown Jackson would make her the first Black woman to serve on the Supreme Court that once ruled that Black people could not be American citizens and upheld racial segregation. Jackson is exceptionally qualified to sit on the Supreme Court, and her criminal defense background will bring a perspective that has been absent from the Court since Justice Thurgood Marshall. Her historic nomination will prove to young Black girls across the United States that they can grow up to be anything they want — even a Supreme Court Justice. In selecting Jackson, Biden has fulfilled one of his core campaign promises and delivered for his most loyal voters.

Biden has nominated an activist judge backed by powerful progressive groups, such as Demand Justice, MoveOn, and Indivisible. ActBlue, the Democratic Party’s digital fundraising, raked in over $1 million in donations in the hours following Biden’s nomination. Jackson’s rulings have been consistently overruled for judicial overreach, demonstrating the power-hungry nature of her legal background. In addition, she has very few years of experience having served only one year on the D.C. Circuit Court. However, the most worrying part of her nomination comes from the fact Biden selected her primarily based on her being a black woman. No one in the United States of America should be selected for a job based primarily on immutable characteristics.

Slate praises Jackson as an excellent pick, saying she will provide a much-needed win to Democrats and provide a fresh voice on the Supreme Court’s liberal wing. It also outlines how many of her life experiences will be valuable assets currently absent from the Court.

This White House press release outlines President Biden’s search for a nominee and a brief overview of Ketanji Brown Jackson.