
Thank you for subscribing to the Civil Newsletter!
Oops! Something went wrong while submitting the form.
New Articles every Monday, Wednesday, and Friday
April 15, 2022
·
Crime

Authorities have arrested a suspect in the NYC subway shooting. The incident has sparked a debate over gun control and identity politics. 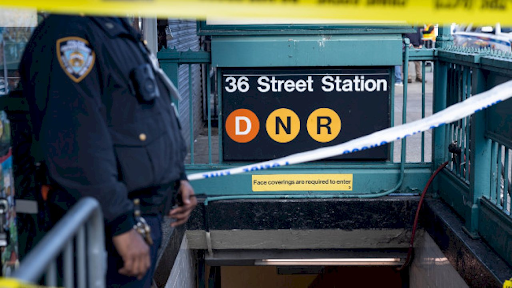 On April 12, a tragic scene unfolded in a New York City subway. A shooter wearing a gas mask entered the subway throwing smoke bombs and opening fire. The gunman shot 10 commuters, with an additional 13 injured from smoke inhalation or the crowd fleeing the subway car. Authorities launched a citywide search for the shooter as he escaped into America’s most populous city.

According to law enforcement, the suspect left numerous clues at the crime scene, including the gun used in the attack, a credit card in his name, and keys to a U-Haul he rented on Monday. Authorities released photos of the individual, asking for the public’s help to locate him. On Wednesday, bystander Zack Tahhan saw the Brooklyn subway shooting suspect walking down the sidewalk with a bag over his shoulder and alerted nearby officers. Authorities arrested the 62-year-old suspect, ending the nearly 30-hour search. Federal prosecutors charged him with a federal terrorism offense shortly after his arrest. If convicted, he faces life in prison.

With the suspected gunman in custody, many have turned their attention to how the gunman got away undetected. According to authorities, the shooter was able to get onto a separate train after the incident and escaped into the city after it reached the next station. In addition, a Metropolitan Transportation Authority (MTA) surveillance camera in the Sunset Park station was not working during the shooting, making it easier for the suspect to escape. Officials are investigating why the surveillance camera was not functioning. However, hoping to illustrate to riders that the subway is safe, MTA Chairman Janno Lieber said there was more than enough video evidence to help the NYPD arrest the suspect.

Many have questioned the shooter’s motive, as authorities have yet to publicly reveal one. On a now-removed YouTube account, the suspect criticized Mayor Eric Adams’ public safety and homeless policies. He also posted bigoted tirades claiming a looming race war between white and Black people in the United States. He repeatedly threatened violence and made hateful remarks about white people, Black people, Jewish people, and Mexicans. YouTube has since taken down the suspect’s channel for violating the platform’s community guidelines. Some on the Right have pointed to this incident as evidence of the rise of Black Identity Extremism, which the FBI classifies as a terrorist threat, and call back to the Waukesha Christmas parade. Those on the Left say the attack highlights the need for stricter gun laws, as the suspect had a history of criminal activity and mental health struggles.

Last year, then-candidate Eric Adams faced a crowded Democratic primary but emerged victorious in July. Adams, a former police captain, heavily campaigned on reducing crime in NYC — specifically subway crime. While many of Adam’s opponents called for cutting the police department’s budget, he vowed to increase police patrols. Amid growing violent crime in NYC and across the country, several high-profile incidents in the subways have shocked the city during Adams’ tenure. There was an uptick in assaults on the subways last year and an incident in late January this year brought national attention to subway crimes as an attacker pushed a woman to her death on the tracks. These cases have drawn renewed scrutiny to Adams’ approach to crime in NYC. As Adams argues for more police presence, activists criticize the plan and say it will only worsen existing problems.

This Brooklyn subway shooting is a tragedy. As people made their morning commute to school and work, they faced suffocating smoke and a hail of gunfire. No one in America should have to fear such violent, preventable attacks. Despite well-documented criminal offenses and mental health issues, the suspected gunman bought his firearm legally. This individual should have never been able to buy a gun. The gun violence epidemic requires a multifaceted approach. As part of that strategy, we must enact commonsense gun reform and expand mental health services to treat troubled individuals before disaster strikes.

This terrorist attack is the result of radical Democratic bail reform. The shooter was released multiple times from custody before committing this act. Black identity extremism is the result of identity politics which divides Americans based on race and teaches that black Americans are oppressed people dominated by a system of white supremacy. Now, Democrats will turn their attention to ambiguous gun control measures rather than focusing on the heart of the problem: identity politics and soft on crime sentencing.

Rep. Velazquez on NYC Subway Shooting: We have to deal with this in holistic manner

Rep. Velazquez (D-NY), who represents the district where the shooting happened, joins MSNBC host Joy Reid to argue that this incident illustrates the need for a holistic approach to gun violence.

How Many More Violent Attacks By Black Supremacists Before We’re Allowed To Notice? | Ep. 1474

Ben Shapiro goes over the events leading to the arrest of the subway shooting suspect and provides an analysis of the political situation.

Horowitz: The Brooklyn shooting and the rise of black nationalism

NYC Mayor Eric Adams and NYPD Police Commissioner Keechant Sewell discuss the arrest of a suspect in the subway shooting at a press conference.