
Thank you for subscribing to the Civil Newsletter!
Oops! Something went wrong while submitting the form.
New Articles every Monday, Wednesday, and Friday
January 25, 2022
·
Foreign Policy 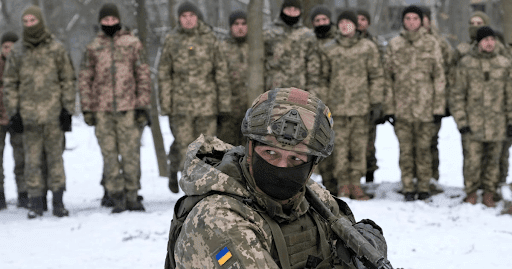 Tensions continue to rise between the United States and Russia over the latter’s potential invasion of Ukraine, a former Soviet Republic in Eastern Europe. Despite a series of face-to-face negotiations, the two countries have made little progress toward de-escalation. On Sunday, the U.S. State Department ordered non-essential embassy staff to evacuate Ukraine and recommended that all Americans in Ukraine should follow suit, citing the potential Russian invasion. Russia has denied accusations it is preparing to invade Ukraine, despite positioning roughly 100,000 troops along their shared border. This is not the first time Russia and the United States have clashed over Ukraine. When Russia annexed the Crimean Peninsula in 2014, the U.S. and its allies struck back by kicking it out of the G-8, an international organization consisting of the eight largest economies in the world. Ukrainian forces have fought Russian-backed separatists since the 2014 annexation, and estimates show more than 13,000 people have died in the conflict.

Russian officials have called for the U.S. to prevent any further eastern expansion of NATO, a collective security agreement formed during the Cold War to combat Russian aggression. Ukraine has pushed to join the alliance since 2002, though it has been unsuccessful so far, primarily due to Russian objections. Russia also wants NATO to remove some of the military infrastructure and personnel stationed in Eastern Europe. However, members of the Biden administration and top NATO officials have said these demands are off the table. Britain has accused Russia of plotting to overthrow the Ukrainian government and establish a pro-Russia regime. According to British intelligence, Russian officials have contacted some former Ukrainian politicians to plan for such a move. This report comes amid other allegations from the United States and its allies accusing Russia of planning a “false-flag” attack as a pretext for invasion and engaging in significant cyberattacks against the Ukrainian government.

Some analysts feel there is a lack of a unified front from the West, a weakness Russian President Vladimir Putin will exploit. The Biden administration placed 8,500 troops on “high alert” on Monday for possible deployment to NATO allies in Eastern Europe. However, while the United States has pledged serious consequences like widespread sanctions should Russia invade, other Western allies like Germany have been much more lukewarm in their defiance. Russia is the top oil, natural gas, and coal supplier to Europe, and many worry that retaliatory sanctions could devastate the European energy sector.

President Biden drew a mix of praise and criticism in his first press conference of the year last week, in which he dedicated a significant portion to addressing the crisis in Ukraine. Biden publicly admitted that he suspects Russia will invade Ukraine, but he did say he does not believe Putin wants “full-blown war.” However, the President ignited fury among top Ukrainian officials and many on the Right when he distinguished between an invasion and “minor incursion,” which critics say gives Putin carte blanche to do as he pleases. The White House quickly walked back those statements, but most headlines focused on the comments after the conference.

President Biden is a skilled diplomat with decades of experience in foreign affairs. He recognizes the value of America’s alliances during this tense period. We must hope that the administration can reach a peaceful, diplomatic solution to this crisis. However, should Russia invade, the United States and its allies will move in concert to impose devastating sanctions on Russia. Furthermore, President Biden must refuse to compromise the integrity of NATO – only member states should make decisions about granting membership.

Last Wednesday, President Biden needed a two-hour press conference to explain his various failures. During that press conference, he stated he would allow Russia to incur into Ukrainian territory. The weakness of this President on foreign policy in Afghanistan has opened the floodgates for Russia seeking territorial gains, China mounting pressure against Taiwan, and terrorists launching rockets at our embassy in Baghdad.

US Issues Stark Warning To Russia Over Ukraine

The Biden administration laid out severe penalties should Russia invade Ukraine. It also outlines some of the diplomatic missions the administration has undertaken and how the U.S. might work with its allies to combat Russian aggression.

Russia could invade Ukraine ‘at any point’ as it moves troops west, US warns