
Thank you for subscribing to the Civil Newsletter!
Oops! Something went wrong while submitting the form.
New Articles every Monday, Wednesday, and Friday
February 22, 2022
·
Foreign Policy 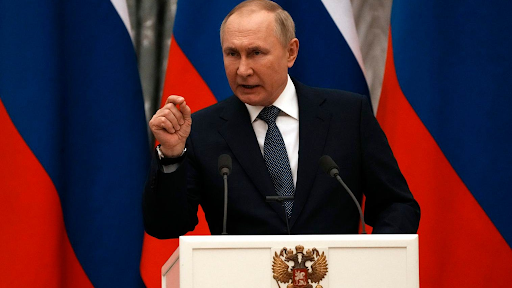 On Monday, tensions between Russia and Ukraine reached new heights as Russian President Vladimir Putin delivered a national address, arguing that Ukraine is a historically integral part of Russia. Putin signed decrees recognizing the independence of two self-proclaimed republics in the Donbas region in eastern Ukraine. Russian-backed separatists in those two regions – Donetsk and Luhansk – have been engaged in conflict with the Ukrainian government since 2014, when a revolution led to the ousting of the nation’s pro-Russia leader. These rebels do not hold all the territory in those areas and have asked Russia for military support to take complete control.

Late Monday, Putin announced that he would send “peacekeeping” forces into the regions, a move many view as a de facto declaration of war. At the moment, it is unclear if the additional Russian troops will assist the separatists in taking the entirety of the Donbas region, but it seems likely.

The United Nations Security Council held an emergency meeting last night on the developments. Putin’s announcement violates the Minsk Accords – a set of French and German-brokered agreements from 2014 and 2015 – designed to scale back the conflict in eastern Ukraine. The White House announced President Biden would soon sign an executive order to impose sanctions against the two regions and promised more severe ones should an invasion occur. Leaders of the European Union announced Monday evening that “The Union will react with sanctions against those involved” in the recent escalations. British Prime Minister Boris Johnson called the move a breach of international law, promising economic sanctions. French President Emmanuel Macron and German Chancellor Olaf Scholtz, who received advance notice of Putin’s decision, condemned his actions. Many other leaders joined in denouncing the declaration. In a national address on Tuesday, Ukrainian President Zelensky declared Ukraine would not surrender its borders to the Russians, setting up a seemingly unavoidable showdown.

Experts and Western officials remain concerned that Russia could use a manufactured event as a pretext for a full-scale invasion of Ukraine, otherwise known as a false flag. Over the weekend, popular Russian newspaper Pravda ran a piece claiming several Ukrainian artillery shells killed civilians in disputed territory in east Ukraine, with other projectiles landing in Russian territory. Ukrainian officials quickly denied the allegations. Additionally, separatists and Russian state media have repeatedly claimed that Ukraine is preparing a military offensive, which Ukrainian officials and journalists deny. U.S. officials dismissed the allegation as a distraction and a potential false flag event.

Despite prior commitments to pull back tens of thousands of troops from Ukraine’s northern border in Belarus, Russia extended military drills there that were supposed to end on Sunday. Russia also has continued naval exercises in the Black Sea, where Ukraine has many ports, creating concerns that Russia could institute a complete blockade. Most significantly of all, Putin’s move on Monday to both recognize and send troops to the two breakaway separatist regions in eastern Ukraine added to existing doubts about his dedication to diplomatic efforts. It will almost certainly forestall the proposed summit between President Biden and Putin, one of the administration’s last hopes to avoid bloodshed.

U.S. intelligence reports have added to fears of grave humanitarian consequences, with a Monday allegation that Russia has a “kill list” of individuals to target in Ukraine. Early estimates predict a full-scale invasion could cause 50,000 civilian deaths and five million refugees to flee the country. Western officials maintain that they will impose massive and devastating sanctions if Russian troops move into Ukraine, while Russia says the West is not taking its security concerns about Ukraine’s potential NATO membership seriously.

Vladimir Putin’s Monday decision to recognize the “independence” of Donetsk and Luhansk are clear violations of international law and direct assaults on Ukrainian sovereignty. Former President Trump weakened U.S. support for the fledgling democracy and its position globally with his isolationist policies and frequent Ukraine-bashing. His efforts to undermine an American ally by framing it as corrupt and Biden-aligned facilitated the Russian aggression currently facing the country. Trump withheld vital military aid for political leverage, exacerbating Ukraine’s many security concerns as Putin’s forces sit on Kyiv’s doorstep. President Biden is a skilled foreign policy leader who has shown consistent dedication to American allies. Through his term, he has restored America as the world’s leader, and this position will allow him to combat all Putin’s assaults on Ukraine.

It is blatantly apparent that when a Democrat president is in charge, the world suffers. Under Trump, Russia was docile, and Ukraine experienced peace. In the Middle East, the Trump administration oversaw historic peace agreements with the Abraham Accords. Just one year into the Biden presidency has seen the complete reversion of these achievements and turmoil across the globe. Now two U.S. embassies have been evacuated and Russia has falsely recognized the independence of two regions. As the dominos fall, China will turn its eye to Taiwan, North Korea will continue to test its nuclear capabilities, and the Taliban will begin funding global terrorist operations.

Putin Declares 6,500 Square Miles of Ukraine Is No Longer Ukraine

Tim Pool covers the recent escalations in the Russia-Ukraine crisis and how they may serve as a precursor to a full-scale invasion. It also outlines how this event could lead other countries to move against U.S. national security interests. Pool further analyzes how domestic politics could play a role, arguing Democrats are to blame.

Shapiro Breaks Down the Russia vs. Ukraine Conflict

Russia announced that it will withdraw some troops from near the Ukrainian border, leading to “cautious optimism” by NATO and Ukrainian leaders amidst growing concerns of a Vladimir Putin-led invasion of the former Soviet country. Shapiro weighs in.

Russian President Vladimir Putin has delivered a video address to the nation in Moscow amid fears an invasion into Ukraine is imminent.

How Tucker Carlson Became One Of Russia’s Biggest Cheerleaders

Russian President Vladimir Putin recognized two separatist regions of Ukraine as independent on Monday and hours later ordered Russian troops to conduct what the Kremlin called a “peacekeeping operation” in those territories.