
Thank you for subscribing to the Civil Newsletter!
Oops! Something went wrong while submitting the form.
New Articles every Monday, Wednesday, and Friday
March 25, 2022
·
LGBTQ

This past week, the Republican Governors of Indiana and Utah vetoed transgender sports bans from their respective state legislatures. 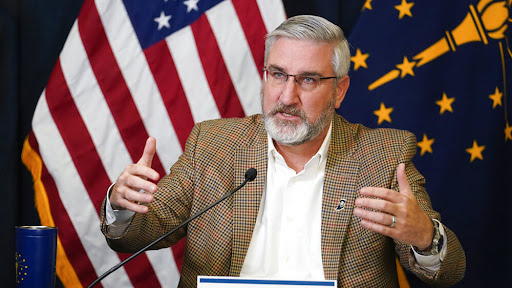 See our coverage of other recent transgender sports bans and Left/Right narratives here.

On Monday, Indiana Governor Eric Holcomb (R) vetoed a bill from the Republican-led legislature that would ban transgender females from participating in girls’ sports. While Holcomb had signaled support for the measure in the past, he said the final legislation failed to provide a consistent statewide policy of “fairness in K-12 sports.” The Indiana High School Athletic Association, which requires transgender athletes to ask to play on the team they identify with, says it has had no transgender females request to play on a girls’ team. In his veto letter, Holcomb said this led him to believe that there is no existing problem “that requires further state government intervention.” He also expressed concern over similar bills in other states that already face court challenges. The ACLU of Indiana was already preparing to sue if the Governor signed it into law, and Democrats criticized the bill as hateful and discriminatory. Many Indiana Republicans have condemned Holcomb for his veto, vowing to override it and “protect women’s sports.” An override requires a simple majority of the Indiana House and Senate.

Against that backdrop, Utah Governor Spencer Cox (R) vetoed a similar bill from his state’s Republican-led legislature. In a letter to top Republican lawmakers explaining his decision, Cox argued that the legislation would expose Utah’s High School Athletics Association and local school districts to costly litigation. He also suggested Republican legislators blindsided him by hastily changing the bill hours before it passed. The initial proposal would have established a commission to assess specific transgender athletes desiring to compete on the team that matches their gender identity. Lastly, he cited evidence of only four transgender athletes in Utah, only one of which plays on a girls’ team, and referenced evidence of higher rates of mental health issues among transgender youth.

Republican lawmakers say their constituents demand the ban to ensure fairness in sports and have promised an override vote later today. A veto override requires a supermajority of both chambers of Utah’s Legislature, which Republicans have. Likely anticipating the success of such a vote, Cox has called a special legislative session for lawmakers to work on the potential legal and financial consequences.