
Thank you for subscribing to the Civil Newsletter!
Oops! Something went wrong while submitting the form.
New Articles every Monday, Wednesday, and Friday
March 9, 2022
·
Foreign Policy

Several major updates in the Russian invasion of Ukraine 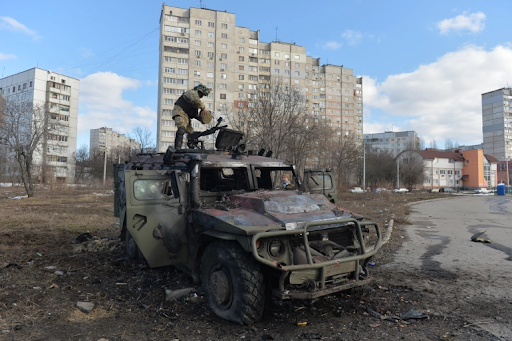 As the war in Ukraine drags on, Russian attacks have become more indiscriminate and sparked a massive refugee crisis in Europe as millions flee violence. Experts increasingly fear that the civilian death toll could skyrocket. And as the conflict carries on, international pressure continues to mount as countries impose more measures to punish Russia for its aggression.

On Tuesday, President Biden announced that the U.S. would ban imports of Russian oil, which account for nearly 8% of American energy imports. While the U.S. has enacted most sanctions with its European allies, analysts do not expect Europe to take similar steps on Russian oil imports, which account for roughly 40% of its natural gas and 25% of its oil. However, the United Kingdom and European Union have unveiled long-term plans to lessen their dependence on Russian energy imports. Oil prices further increased following the President’s announcement and hit a record-high in recent days.

The Kremlin proposed a series of demands in its talks with Ukraine, including requiring Ukraine to “cease military action, change its constitution to enshrine neutrality, acknowledge Crimea as Russian territory, and recognize the separatist republics of Donetsk and Luhansk as independent states.” Russia says it will stop military operations “in a moment” if Ukraine meets these demands. While it is unlikely that Ukraine will meet all those demands, Ukraine and Russia’s foreign ministers will meet in Turkey for further discussions.

Ukraine rejected a Russian proposal to create “humanitarian corridors” for civilians to escape war-torn Ukraine to Belarus and Russia.

Russians boycotted a hearing by the International Court of Justice, the U.N. court that settles alleged international law violations, to discuss the nation’s invasion of Ukraine.

As a Russia-Ukraine ceasefire fell apart, Putin called Western sanctions equivalent to “declaring war.” He also said that the future of Ukrainian statehood is in doubt, prompting fears he may be considering total annexation.

After Russian authorities arrested thousands more protestors on Sunday, watchdogs estimate the new total of prisoners from anti-war demonstrations to be around 13,000 people.

Russia has thrown a wrench in ongoing talks to revive a 2015 nuclear agreement with Iran, asking for written guarantees that U.S. and Western sanctions will not impact its trade relations with Iran.

In a call with American lawmakers, Ukrainian president Zelensky asked the U.S. to give the Ukrainians military aircraft and stop importing Russian oil.

As the U.S. works to reassure its NATO allies in the eastern part of the pact, Vice President Harris will travel to Poland and Romania and the Pentagon has committed 500 additional troops.

Russian forces captured the Zaporizhzhia nuclear power complex, the largest in Europe. Heavy fighting in the area caused a fire to break out, though officials extinguished it, and the plant is now stable. While the International Atomic Energy Agency confirmed that no radioactive material leaked, the attack sparked international concern over a potential nuclear meltdown.

Putin signed a bill criminalizing “fake news,” resulting in bans of the BBC, DW, and other major news outlets. As a result, the New York Times pulled journalists out of Russia over fears of potential imprisonment of their staff on March 8.

The United States implemented an additional series of sanctions, hitting Russian oligarchs and others close to Putin. As the war continues, Western companies have also begun to pile on pressure. On March 1, Apple announced that it would stop selling its iPhone and other popular products in Russia and ceased functions of Apple Pay. As of March 5, airplane manufacturers Boeing and Airbus have cut off resources to Russia, encouraging more companies to follow suit.

Since our last update, several significant reports have emerged, as the West and its allies continue to take steps to punish Putin for his invasion of Ukraine, and Russia reacts to the ever-growing moves against him. Here are some of the most notable developments:

In addition to these major events, there has been lots of misinformation surrounding the Russian invasion of Ukraine. This includes initial reporting that Russian forces killed 13 Ukrainian soldiers on Snake Island, which now is questionable as the Ukrainian Navy claims they are alive and were taken captive. Separately, the Ukrainian government has consistently promoted the story of the “Ghost of Kyiv,” who is allegedly an ace fighter pilot. However, video footage allegedly showing him downing Russian aircraft was later revealed to be from a video game.

Click here to view the Google Slides for this update.

Since Putin announced the full-scale invasion of Ukraine on Thursday, anti-war rallies have erupted in cities across Russia. The Kremlin has downplayed the protests, insisting most Russians support the war, while Russian police crackdown on demonstrations, arresting hundreds of protestors daily. According to observer groups, Russian authorities arrested nearly 6,000 people from Thursday to Sunday. The government has further moved to stifle opposition voices by restricting access to Twitter and Facebook. Russians have flocked to ATMs, fearing the potential economic impact of Western sanctions.

On Saturday, the United States and Europe announced their most severe economic sanctions yet, restrictions on several major Russian banks’ access to the SWIFT international payments system. On Sunday, Putin ordered Russia’s nuclear deterrent on high alert, blaming the reaction. The West swiftly condemned the dangerous rhetoric and imposed even more economic consequences yesterday. Here’s what else happened...

Despite everything that’s gone on over the past five days, Ukrainian and Russian negotiators have agreed to hold talks in Belarus, a potential glimmer of light in an horror-filled weekend.