
Thank you for subscribing to the Civil Newsletter!
Oops! Something went wrong while submitting the form.
New Articles every Monday, Wednesday, and Friday
March 28, 2022
·
Foreign Policy

An update of some of the most significant events in the conflict in Ukraine from March 9-28. 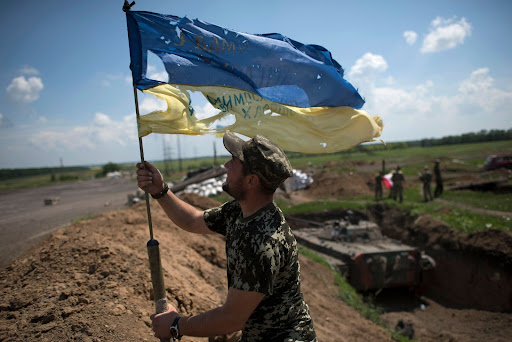 U.S. President Joe Biden delivered a major address in Poland calling for unity in the face of Russian aggression. During the speech Biden said Russian leader Vladimir Putin “cannot remain in power” over his invasion of Ukraine. The quote drew attention as it insinuates the U.S. will take action to remove Putin. Administration officials and lawmakers stressed that the United States was not seeking regime change in Russia despite President Biden’s comment. However, others like Russian chess grandmaster and chair of the Human Rights Foundation Garry Kasparov, said the White House should not have walked back Biden’s remark. In his opinion Russian President Vladimir Putin should not remain in power.

While addressing U.S. servicemen in Poland, President Biden told troops “when you’re there [in Ukraine]” in an apparent gaffe. The President was speaking about the conditions in Ukraine when he said, “You’re going to see, when you’re there, and some of you have been there, you’re going to see women, young people, standing in the middle, in front of the damn tank.” Immediately, Republicans began speculating if Biden had intended this comment or unknowingly released information about a future classified plan.

In emergency meetings on March 24, the leaders of NATO, the G-7, and the European Union worked on plans to put further pressure on Putin. At the meetings, President Biden expressed his support for the growing movement to oust Russia from the G-20. He has said that he will propose inviting Ukraine as an observer state if members refuse to boot Russia from the group. On the same day, the United Nations General Assembly added further international pressure on Russia, passing a resolution to formally blame it for the humanitarian crisis in Ukraine and calling for an end to the war.

On March 23, Putin announced that Russia would require “unfriendly countries” to pay for Russian natural gas exports in rubles, an apparent attempt to prop up the Russian currency as it faces collapse amid Western sanctions.

The Ukrainian port city of Mariupol has faced intense bombardment from Russian forces, resulting in the suffering of hundreds of thousands of civilians. On March 21, Ukraine rejected Russian demands to surrender the port city.

Also on March 21, a Russian court banned Facebook and Instagram for “extremist activities.” Russia already blocks both platforms in the country, but is currently working to label Meta, the parent company, as an “extremist organization.” These moves come as Meta decided to temporarily change its hate speech policy in some countries earlier this month, allowing for some users to call for violence against Russian soldiers.

In a speech before the German parliament, the Bundestag, President Zelensky criticized Germany for its lack of action in the Ukraine conflict. Similar to his address to the U.S. Congress, Zelensky called on the German government to help establish a no-fly zone over Ukraine. In another attempt for foreign aid, Zelenskyy addressed the Israeli Knesset and invoked the Holocaust as a means to gain access to Israel’s Iron Dome missile defense system.  Zelensky, who is Jewish, said, “Ukraine made the choice to save Jews 80 years ago, now it’s time for Israel to make its choice [...] Our people are now wandering the world and looking for a place the same way that you once wandered.” Zelenskyy also accused Russia of invoking a “Final Solution” on Ukraine, just like the Nazis did against Jews in World War II. Israel's Communications Minister Yoaz Hendel tweeted that while he "supports the Ukrainian people in heart and deed...comparison to the horrors of the Holocaust and the final solution is outrageous."

Also on March 17, the U.S. House voted overwhelmingly (424-8) to strip Russia and Belarus of their “most-favored” trade status. The measure is currently waiting in the Senate, where the vote has stalled. If approved, the United States would automatically raise tariffs on Russian and Belarussian imports and authorize the President to raise them even further.

In an impassioned speech to the U.S. Congress on March 16, Ukrainian President Zelensky compared the Russian invasion of Ukraine to the attacks on Pearl Harbor and the World Trade Center. Zelensky asked for further aid and more punitive sanctions on Russia. He also renewed calls for the U.S. and its NATO allies to help establish a no-fly zone over Ukraine, saying the move is necessary to protect civilians from Russian bombardment. While some NATO members, such as Lithuania, have supported the idea, most have strongly resisted the notion. A no-fly zone is a territory where a military has prohibited aircraft from entering. Such a move could put American and NATO forces in direct conflict with Russian ones, potentially escalating the situation to a full-blown world war.

Also on March 16, President Biden called Putin a war criminal — the first time he has publicly used that label. Senior U.S. officials had been hesitant to make that claim up to that point. The Russian Ministry of Foreign Affairs summoned the U.S. Ambassador to Russia in response to the comments. They warned that the remarks put “Russian-American relations on the verge of rupture.” On March 23, the U.S. government officially declared that Russian forces committed war crimes in Ukraine by hitting civilian targets.

In one of the most high-profile Russian protests against the war in Ukraine, a woman interrupted a live broadcast on Russian state TV on March 14. She held a sign that read “NO WAR. Stop the war. Don’t believe propaganda. They are lying to you here.” After cutting to another channel, Russian authorities arrested the woman, Marina Ovsyannikova. Prosecutors charged her under a new statute criminalizing the spread of “fake news” or discrediting the military.

Former Congresswoman and Democratic presidential primary candidate Tulsi Gabbard released a four-minute video attacking Senator Mitt Romney (R-UT) for his comments about her. Romney had called Gabbard a treasonous liar for her questions regarding the existence of U.S.-funded biolabs in Ukraine. These comments come amid a tumultuous report of the United States funding four biolabs in Ukraine. Gabbard, and some on the Right, have indicated a need for a broader investigation prompted by apparent confirmation of the biolab theory from Hunter Biden’s laptop. Russian state media also disseminated the story, indicating that it could be false. Many on the Right and Left dismissed the biolabs theory as either a conspiracy or Russian propaganda.

In mid-March, Russia reportedly asked China for economic aid as it struggles with Western sanctions and military assistance for its attack on Ukraine, though the Kremlin denied those claims. So far, China has not directly condemned the Russian invasion. Shortly after this news emerged, U.S. and Chinese officials met for seven hours in Rome on March 14, and American diplomats vowed severe consequences if China helps Russia evade sanctions. In a nearly two-hour video call just four days later, President Biden repeated those warnings directly to Chinese President Xi Jinping. While Xi said China would work to end the conflict in Ukraine, he criticized the U.S. and its European allies, alleging they provoked Putin to attack.

On March 13, Russian forces open-fired on a car holding American journalist and filmmaker Brent Renaud, killing him and making him the first known journalist to die in Ukraine. Two days later, Russian forces similarly fired on a vehicle containing three Fox News journalists, killing two of them — Pierre Zakrzewski and Oleksandra Kuvshynova. The third correspondent — Benjamin Hall — is back in the United States, though he is still in the hospital.

Over the past couple of weeks, several Western officials have warned that Russia could use chemical weapons in Ukraine. On March 12, NATO Secretary-General Jens Stoltenberg said that the Kremlin could be spreading misinformation surrounding biological labs in Ukraine as a pretext for using chemical weapons. Later, on March 21, President Biden said there were “clear signs” Putin is weighing the use of chemical or biological weapons. Then, on March 24, Biden said at an emergency NATO summit that the alliance would respond “in-kind” if Russia used those weapons. The United Nations has several agreements that prohibit their use, most recently the Organization for the Prohibition of Chemical Weapons, to which Russia is a signatory.

Also on March 12, Russian Deputy Foreign Minister Sergei Ryabkov said that Western arms shipments are “legitimate targets” for the Russian military. The comments came days after the U.S. Congress approved $13.6 billion in military and humanitarian assistance to Ukraine. The U.S. and its allies have collectively sent thousands of weapons to Ukraine. The announcement was likely an attempt by Russian officials to deter further Western military aid to Ukraine.

On March 10, President Zelensky signed a bill allowing Ukraine to seize Russian-owned property in-country without any compensation to the owners. In part of an ongoing crackdown in Ukraine on any organizations or people with Russian ties, Zelensky banned 11 political parties with links to Russia on March 20.

Ukrainian government officials posted a video allegedly showing damage from a Russian strike on a maternity hospital in Mariupol. President Zelenskyy also posted the video stating, “People, children are under the wreckage. Atrocity!” The video shows portions of a blown-out building and no injured civilians, although photos circulated of injuries shortly after with one reported death. Additional photos which were released show a massive crater in the courtyard of the apparent hospital.